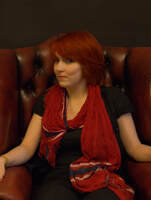 Q: Why write a book that has rape as a central theme?
A: Honestly, rape is always going to be a topic that people are drawn to exploring, because of that natural taboo that exists around it--writing about rape was something I was told that I couldn't or shouldn't do in the context of a romance, and so, being as stubborn as I am, I wanted to prove that I could do it anyway. More than that, though, I wanted to explore something beyond just "rape bad." A lot of media has been taking on more complicated looks into sexual assault and rape, and I think we're at a point of major change in the way we talk about rape and the stories we tell about it. And I really wanted to be a part of that!

Q: Are there any parts of the book you’re especially proud of and if so why?
A: Honestly, I’m proud of the entire thing and could talk about how very proud I am of it for days. If I had to narrow it down (and bear in mind that I am a British person so “taking pride in my achievements” is a new one on me), I’m really pleased with the fact that this is a book I really would have wanted to read even if I hadn’t written it. It covers some issues that I haven’t seen covered in other books (not that they’re not out there, just that I haven’t come across them yet), and I hope that it makes some people dealing with similar stuff feel understood.

Q: To what extent did recent events influence the book?
A: I started writing Right Guy, Wrong Time before the Weinstein scandal and everything that came with it broke, but it had a huge impact on the direction the book took. I remember reading that Asia Argento interview and just bursting into tears, pulling up the manuscript, and writing a thousand words to exorcise how awful all of it was. Right Guy, Wrong Time  is a book I wrote a lot of while really, really angry, and the still- unfolding sexual abuse scandal was a fire under my butt for a lot of that.

Q: Is any of it based on your own experiences and how you dealt with them?
A: I’ve written about my dealings with vaginismus on this blog in the past and there’s no doubt that handling that and the frustration and self-esteem body-blows that came with it made up a big part of the groundwork for my writing in Right Guy, Wrong Time  about the same thing. I’m also a giant rah- rah-my-female-friends-are-all-my-soulmates type, and I think that really heavily influenced how important the support network is in Right Guy, Wrong Time. And yeah, there are some other significant things in my life that have influenced the writing of this book and my choice to pen it in the first place, but that’s not something I’m super comfortable going into at this time, though I probably will at some point before the book comes out if it’s something people think would inform their reading of the book.

Q: How would you define the perfect reader for Right Guy, Wrong Time ?
A: It doesn’t sound great if I just come out and say “I’m targeting victims of rape,” but that’s sort of the case here. Basically, the person who I think would get the most out of Right Guy, Wrong Time is someone who has probably dealt with some of the issues it covers (such as sexual dysfunction, rape, assault, harassment, etc.) but finds the depictions of these things in the media they consume lacking. I wanted to write Right Guy, Wrong Time  because I found myself despairing at the way rape was depicted in most of the pop culture I immersed myself in, and I imagine that the people who’ll get the most out of this feel the same way.

Q: What made you want to publish a book like Right Guy, Wrong Time, which has elements of New Adult romance and erotica, but also deals with rape?
A: Well, to be honest, it wasn’t an entirely easy decision. But Frayed Edge Press is actively trying to publish things that are a bit outside of the mainstream and that may be dealing with harder issues. The theme of date rape was handled very sensitively, in a way that I think would not be offensive to most readers. Early readers were almost universally positive about the book and found it highly relatable. There's an interesting balancing act that the main character has to deal with: dealing with the physical and emotional fallout of having been raped, while also trying to navigate a potential new relationship. That dynamic both lightens the tone and helps the book rise above just being about "dealing with rape."

Q: What’s your favorite thing about the book?
A: There are a lot of things that I like about the book, so it’s hard to choose just one! I like that, despite the fact that dealing with the aftermath of date rape is one of the major themes of the book, it’s not at all a dark book that’s a downer to read. It’s actually kind of a light and fun read—and to put both of those things together is really hard to pull off! I also really like the book’s main character, Edie. Unlike most of the main characters I see in a lot of so-called “women’s fiction,” she’s not this perfect, ideal woman. She has her own flaws and her own struggles, and she doesn’t always get it right the first time. Because of that, she seems very real to me, and very relatable. I also have to admit that I like the way that the sex scenes were handled in this book. Writing about sex isn’t easy, and not everyone is good at it! Louise has a background in writing erotica, so I think that experience helped her in integrating sex realistically into  a more mainstream novel. I like to say that she gets bonus points for having the consensual sex in the book clearly be “safe sex”—and the way that it’s written, it doesn’t come off as awkward at all. It just seems to be a natural, expected part of the experience.

Q: How would you define the perfect reader for Right Guy, Wrong Time ?
A: I’d agree with Louise that people who have experienced date rape or other forms of sexual assault would benefit from reading this book, and that was certainly the case with some of the early readers. I think it helped them feel less alone, to know that they aren’t the only ones who’ve had these thoughts and feelings and experiences. I also think that people, especially women, who haven’t had this experience would benefit from reading the book as well. Despite her flaws, the main character Edie is a great role model! She ends up handling her situation in a very positive way, and she stands up to some of the men in her life in a way that’s very empowering. I think that a lot of women would benefit from seeing that kind of interaction modelled. I also think that men who are interested in relationships with women would benefit from reading this book. Aside from the date rape perpetrator, there are a couple of other examples of “men behaving badly” in this book that male readers could learn from in a “what not to do” kind of way. And the love interest Philip of course stands as a more positive model of behaviors that many women find attractive in a relationship.
Age-wise, I see this novel as fitting in most closely with the “New Adult” genre. The characters are all in the “post-university, starting to get serious about my career” stage of life. Most are single, so their social lives are very important, with a lot of going to clubs and parties and learning to navigate their way around various relationships, whether that be with friends, co-workers, or dating/love interests. People at this same stage of their lives will find a lot to relate to here! At the same time, the audience is wider than that. I think that some more emotionally mature “young adult” readers would also get a lot out of this novel, and of course many people older than the target audience are still dealing with relationship issues and finding their way in the world. Hopefully, a wide range of readers will find something they can relate to, and something to like, about this novel!