Ambushing the Void : Q & A with Author James McAdams 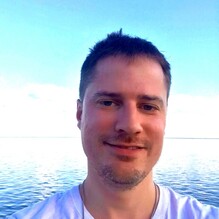 Writing professor, flash fiction editor, and Russian literature super fan James McAdams is a burst of relevant humanity. His short story collection Ambushing the Void, while both floating in booze and dazzling in dystopic shine, is a sober “coming-to” in today’s world of fancy gizmo technology and inane cultural “norms”—all set in the midst of the terrifyingly complex information revolution. McAdams goes where few writers go; no kidding, he even has a story featuring CamGirls! His collection is a fractal picture of society teetering at the edge yet still reined in by compassion, containing maddening (and at times, mischievous) vignettes of misadventure which seek to humanize a world where the line between Amazon Alexa and God have become blurred. With influences ranging from contemporary TV drama to the Roman playwrights of antiquity, McAdams’s style is a delight and his characters: a spectacle. But most of all, his short stories—some only mere flashes, blurps of thought—take on headfirst a realm that few writers dare to. I was delighted to ask him some questions and learn more about his stories as well as his inspiration as a writer.

Q: Your stories seem to focus on American decadence with more than a hint of impending dystopia, but you still seem to find the human being (and often the victim) at the heart of each story. What has made you focus on these themes compared to, say, tamer, more optimistic ones? What draws you to write about the pessimistic present/near future?
A: One of my favorite quotes—it’s my work email signature that all my students (hopefully) Google—is by Terence, whom Wikipedia tells me was a Roman playwright around 100 C.E. Homo sum et humani nihil a me alienum puto, or “I am a human being, and thus nothing human is alien to me.” This is a wonderful maxim for our shrieking fractal present. I try my best when I hear that people commit murder or embezzle from nursing homes or park in handicapped spaces (this should be #1 Commandment) that they are people too, they were children too, they wet their bed too, they’ve been dumped too. So I guess that’s my angle, I would certainly hope there are no characters (at least large characters) in this book that are Criminals or Bad People or the Antagonist. What do you think? As you can probably tell, I’m a huge fan of the “anti-hero” movement in contemporary TV drama. Walter White, c’est moi.

Q: Your stories all revolve around relationships between people—friends, family members, lovers, acquaintances, married couples—and often the things that separate them. What is it about these complex relationships that you find intriguing? Have you had experiences similar to those of your characters?
A: Well, IMO—and I’m probably being a hypocrite here, but—a story really takes off with more than one person. As an editor (and writing professor) I read tons of stories that are about just one person reflecting/expositing while they drink coffee or garden or shop. And I guess that could be the best story ever, but I’d rather add in layers of complexity, and I think you do that (I do that at least) by creating relationships, then destroying relationships, and then finding out what’s left in our hearts. I guess I also want to represent a variety of relationships, some of which we haven’t seen before (do you think there’s a “love story” in any of these?). I mean, check out the urban dictionary: there’s demisexual, ambivert, sapiophile, BAE, etc.

Q: Some of your stories are short portraits, while some are longer, interwoven stories about larger subjects. How do you decide which format to write in?
A: Two answers here, one aesthetic-strategic, one psychological. The former: If I have a sort of wacky or surreal premise (there’s one story in the collection about a young girl thinking Alexa is God, another about a deceased woman contacting her husband through social media...a story I’m writing now involves dead souls working in a prayer factory), I tend to make these shorter, more in the micro/flash range. Because if people don’t accept the premise, they’ll be done with it after 1,000 words anyway. Also, like everyone now, I have a terribly short attention span; so maybe in 2018 I started to write more flash just because I don’t have the patience to write something longer. I’m also flash fiction editor for Barren Magazine so see a lot of great flash works there as well.

Q: Personally, who are you favorite short story writers, or writers in general? How have these authors influenced your own writing?
A: The first book that made me want to be a writer was Crime and Punishment. Big fan of most of the Russians: Gogol, Goncharov (I sleep more than Oblomov), Akhmatova, Mandelstam, and Tolstoy, who supplied the title “Ambushing the Void” in his memoir Boyhood. More contemporary writers include White Noise-era Don Delillo, Pale King-era DFW, All My Puny Sorrows-era Miriam Toews, Lydia Millet, Kathy Acker, Samuel Delaney, Denis Johnson, Bolano, John Williams, who wrote Stoner, et al. 2019 was the year/my year of James Agee—I fully realize Let Us Now Praise Famous Men (a metaphysical reflection on the ethics of reporting on the Great Depression) doesn’t sound like a page-turner, but it’s astounding and I’m ripping it off for my work-in-progress novel. If this counts, everything I ever learned about dialogue came from the writers of Seinfeld and The Sopranos.

Q: You clearly have your thumb on the pulse of our technological age (Amazon Alexa, CamGirl sites, etc.)—what draws you to write about technology as a topic? Is there a message about this that you want to send?
A: The information revolution interests me because at my age (40) I sort of straddle 1) the younger group that grew up with all this stuff and thinks it’s natural, and 2) the older group that doesn’t understand all of this stuff and is scared of it. In other words, I use this stuff every single day, but every single day feel bad and concerned about it. I guess what’s really interesting about all of this revolves around the fact that no matter how much it seems that technology, especially digital/virtual/augmented technologies (for instance I have an app on my phone that allows visually impaired people to “call” me and I can help them pick out clothing, etc.) has created a paradigm shift in humanity, in the end we probably still have all the same needs and desires and fears as before, whether we’re hanging out in a cave or a Ford assembly line or a sub-Reddit forum. Ya know?