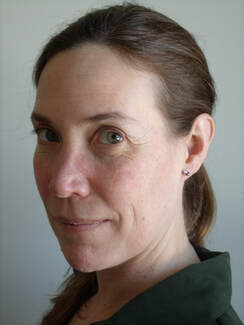 Q: How did you get interested in researching and writing about Jeremiah Hacker, a largely forgotten 19th-century historical figure?
A: In grad school at University of Southern Maine, I did some research projects on local history. I spent my days at the Maine Historical Society library reading old newspapers, which is a time-consuming but rewarding way to do research. Newspapers are such great windows into the past. They tell a whole story. The advertisements tell you what people were shopping for; the letters to the editor tell you what people were concerned about. I’m not always the most organized researcher, because I get sidetracked so easily. It’s hard to stay on topic when reading these fascinating primary texts.
​But in the end, nothing is ever a waste of time. There was one nineteenth-century newspaper in particular I just couldn’t put down: The Pleasure Boat by Jeremiah Hacker. Hacker stood out to me, and not just because he was opinionated. All the nineteenth-century journalists were opinionated; there was no concept of “objective” journalism at that time. But Hacker’s voice was fresh and entirely independent. He had things to say on all the issues Mainers grappled with in the 1840s: slavery, immigration, temperance, women’s rights, prisoners’ rights, working conditions, land reform, religion, war and peace. Some of his ideas sounded surprisingly modern, over 150 years later.
The Pleasure Boat reminded me of my favorite alternative weeklies—the ones you pick up for free on the street corner and they tell you what’s really going on in town—but a 19th-century version. At some point I stopped using The Pleasure Boat as a tool to research other subjects, and started researching The Pleasure Boat itself. And its author. Jeremiah Hacker was so intense, I wanted to know what made him tick. When it came time to choosing a topic for my master’s thesis, there was no question. I had to write about Hacker and The Pleasure Boat. Then after the thesis I realized I still wasn’t finished learning about Hacker, so I kept going until it was a book.

​Q: What was the most surprising or interesting thing you learned about Hacker while writing this book?
A: Learning about Hacker’s personal life was challenging because his life had not been well-documented before, and so every new thing I learned about him surprised me.
His writings give one the impression that it was him against the world. He was a member of no religion, belonged to no political party, and didn’t join reform organizations because they didn’t go far enough. “We had much rather be all alone in the right, than with the whole world in the wrong,” he wrote, using the editorial we.
Early on he wrote about how he composed his newspaper on his knee in a boarding house, then brought it to a printer, then walked all over town distributing papers. He was such a one-man-show, I assumed he stayed that way his whole life. But of course, he didn’t. He did eventually get married, and together he and his wife adopted a daughter. So he was not alone in the world after all.
It’s frustrating to me that I know so little about these women in his life. I do know that his wife Mittie helped print and distribute the paper. In later issues of The Pleasure Boat he refers to her as Mate, and I think that’s a pun. She’s First Mate on the metaphorical boat, but she is also his mate, his life partner. I imagine her ideas were as radical as his, but who knows? They must have had lively dinner conversations, even with Hacker being deaf. And their adopted daughter Margret also helped with the family business: she helped Hacker fold newspapers after school.
Beyond his own adopted daughter, Hacker helped a lot of children. He used his newspaper to facilitate the adoption of orphans. He visited juvenile offenders in prison and found them apprenticeships upon their release. He devoted columns to young readers: not just writing for them, but printing the letters that children wrote to him.
I love the hard and soft edges to his personality: the outspoken journalist railing against the evils of the world, contrasted with the family man and nurturer. Despite the fact that his newspaper made him enemies, he had a way of drawing people to him. He would have been a fascinating person to know.

Q: What do you think is most relevant about Hacker and his ideas for readers today?
A: When former President Donald J. Trump coined the term “fake news” and began calling journalists “enemies of the people,” I thought a lot about the fragility of the freedom of the press. I was finishing up the book in the early days of the Trump administration. It became important to me to highlight Hacker as an independent journalist, and one that was entirely fearless. He wrote and published “the Truth” as he called it, regardless of outside pressure. Hacker received threatening letters and had angry readers storm into his office demanding he pull a story from publication, but he never changed course. Hacker’s cousin, fellow newspaper editor John Neal said of him, “You cannot starve such a man, you cannot frighten him.”
I thought of all this as I watched American reporters get tear gassed, shot with rubber bullets, and arrested while covering Black Lives Matter protests last summer. While doing the crucial work of getting the story out, these members of the press became the story. The work they were doing, and they themselves, were under attack. Freedom of the press is something we can’t ever take for granted.

Q: What was the most surprising or interesting thing you learned about yourself and/or the writing process while writing this book?
A: I was surprised by how completely I lived inside this book while writing it. Even before I thought of it as a book, when I was just writing a thesis, I lived in Hacker’s world. It helped that I was living in Portland, Hacker’s city, so that was the backdrop for my writing. If I had writer’s block, I’d leave my apartment and walk to the Old Port, with its cobblestone streets and Victorian brick buildings. There was a coffee shop on Exchange Street where I liked to write. Exchange Street was where Hacker once had an office and printing press. I liked to picture him walking down the street selling newspapers for two cents a copy, or giving them away, carrying his ear trumpet. Hacker himself never drank anything stronger than water, but I loved to sit in the coffee shop nursing a good strong coffee, watching people come and go, and writing about Portland’s most controversial journalist. Even later when I moved to Bar Harbor, I still had my historical maps and images to keep me immersed in 19th-century Portland.

Q: What are you currently working on/next project(s)?
A: I’m working on a project with my dad. I’m writing down all the stories he used to tell about his growing-up years in Pawtucket, Rhode Island in the 1940s through the ‘60s. So in a way, this is an anecdotal biography of my dad, John McDonald. He is a much different character than Jeremiah Hacker, but a character nonetheless. He wouldn’t mind my saying that.